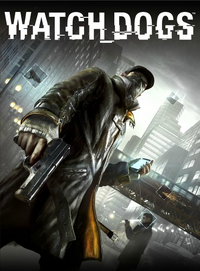 Watch Dogs (stylized as WATCH_DOGS) is an action-adventure-stealth video game developed by Ubisoft Montreal and published by Ubisoft. It was scheduled to be released on November 19, 2013, but was pushed back to May 27, 2014[1] for Microsoft Windows, PlayStation 3, PlayStation 4,[2] Xbox 360 and Xbox One consoles. A Wii U version of Watch Dogs has been confirmed however the game will not be released on this platform until a later date.[3]

Set in a fictionalized version of Chicago, Illinois, the game centers around Aiden Pearce, a highly skilled grey hat hacker who can hack into any device within in the city, taking hold of an entire city's infrastructure, either to obtain and control information or to destroy such devices completely at specific times.

The storyline of Watch Dogs explores the impact of technology within our society; bringing to the forefront the concept of information warfare, data being interconnected, and the world's increasing use of technology— questioning who exactly runs the computers they depend on.

The game is set in a contemporary fictionalized version of Chicago, Illinois, which is one of many cities to feature a supercomputer known as ctOS (Central Operating System). In this version of Chicago, everyone and everything is connected. The city's overarching network controls almost every piece of technology in the city; banks, security cameras, traffic lights, communication hubs, and even key data on the city's residents and activities have been complied into the system and can be used for various purposes. In the game's universe, the Northeast blackout of 2003 was found to be caused by a hacker, prompting the development of ctOS.

In the single-player story, the player controls an Northern Irish-American vigilante named Aiden Pearce, who possesses the singular ability to hack into various electronic devices tied to the city's central operating system through his Smartphone via an application dubbed the "Profiler". Pearce has graduated from adolescent street thug to brilliant hacker; his hacking and social engineering skills ensured he made plenty of underworld contacts, while his aptitude for antisocial behaviour have driven him towards a multitude of clandestine activities and scams.

Watch Dogs' combat system combines the game's core cover-based third-person shooter mechanics with stealth components and parkour. The player's means of offense are a range of weapons; both projectile and melee; the lethality of weapons is very high, as in reality. Though the primary defensive capability is from hacking. Players take control of Aiden Pearce (voiced by Noam Jenkins), who can hack into different electronic devices connected to central operating system of the city (CtOS) using the multiple applications, namely the profiler, on his smartphone, allowing various methods for the player to solve numerous objectives. This feature holds sway over a majority of the game.

A very limited amount of missions will ask for the player to kill or attack opponents[4], leaving the choice of whether to engage "with guns blazing" or with a more quiet, stealthy sneak-through approach to any given situation solely on whom is playing. Both methods of operation are although not without their upshots. Choosing aggression over stealth will give way to a negative view of Aiden in the media. This outcome makes it more likely for civilians to call 9-1-1 if they recognize you or for the police themselves to give chase. While opting for the alternative approach, wherein the player performs non-lethal takedowns and conceals their weapon in public, will take away attention from Aiden. Completing the game almost entirely through stealth is doable.[4] Stealth is also integrated with the driving mechanics, for instance players might opt to "stealth drive"—wherein the player has the ability to park and turn off their vehicle in order to possibly evade detection from patrol cars and search light in a locked down area.[5]

Ubisoft had confirmed that over sixty-five vehicles, each with their own unique physics, would appear in Watch Dogs. In the case of cars, these vehicles range from an average small hatchbacks and superminis up to exotic sports cars and large, heavy trucks. Land-based vehicles are not the only medium by which players may travel; boats are a form of transportation in the game, too. Contrary to popular belief, aircraft cannot be flown in Watch Dogs.

The driving mechanics and cameras have fallen to light controversy among gamers, comparing it to that of Grand Theft Auto IV, which was heavily criticised for lack of acceptable driving physics, rendering the vehicles seeming "boatlike".[6]

Watch Dogs features several different types of weapons which Aiden can use when backed into a corner or in order to augment his hacking abilities. Weapons and ammunition can be purchased from stores or picked up from killed enemies. Weapon types range from compact handguns up to shotguns and .50 cal sniper rifles. He can also craft IED bombs.

Watch Dogs will feature a variety of co-operative and competitive multiplayer modes played either by console-to-console players or console-to-tablet players. Console-console play works more in the traditional sense of multiplayer having a minimum of 2 players to a maximum of 8 playing across the same console platform (ex. Xbox 360 and Xbox 360, PS4 and PS4, PC and PC etc.) in these modes all players will still see themselves as Aiden Pearce on their screens but the online players will look like random civilians, making it feel like each player is the one and only Aiden Pearce. Console-tablet multiplayer works with one console player on any platform and one player using the free Watch_Dogs multiplayer companion app on a tablet or iOS device.

This mode features two players, one of which will be the hacker invading the other player's game and the target or the invaded player. It starts by one player accepting a contract via the profiler. That player will then become the hacker and be merged into another player's game. The other player has no idea that someone has invaded their game. The job of the hacker is to approach the target discreetly by using social stealth (blending with civilians and driving with traffic) to get close enough to hack them and install a backdoor virus on their profiler. When the hacking process is started the invaded player will then be alerted that they are being hacked and that someone has invaded their game. Their job now is to find the hacker to stop the virus upload before it reaches 100%.

In a similar fashion to Online Hacking, the player accepts a Fixer contract to breach another player's game, the twist is the player dropped instead has the task of finding and following the target player throughout Chicago without being detected, the player wins if he manages to tail the target to 100%, partial success happens when the target detects the player and the player either flees or kills the target and failure occurs if the player is killed by the target.

This mode has a maximum of 8 players split up into two teams that will fight over a nearby computer file and decrypt it. The player that holds the file will decrypt it slowly but will go faster if ally players are near by. The team that decrypts the file 100% wins.

Race mode will have up to 8 players racing cars from a fixed start to a fixed finish. Cars will have nitrous boosts.

Players can move around in the streets of Chicago

The tablet player can challenge a console player in a checkpoint race where they hack the city and can call in police to wreck Aiden Pearce before he can reach all the checkpoints.

Development for the game began sometime in 2009[7], after the initial specs for a different game focused on driving, potentially in the Driver franchise, were scrapped with certain parts of that project repurposed into material for Watch Dogs, including the original plan's driving physics. A new engine, called Disrupt, was built at Ubisoft Montreal specifically for the game, which is fine-tuned to handle complex physics and emergent systems and model physical forces such as wind and water intricately.[8]

Ubisoft Montreal's creative director Jonathan Morin said of the game's use of information as a plot point, and how it allows players to control the entire city through its hacking mechanics as "[going] beyond the limits of today's open world games." Lead designer Danny Belanger said that the concept of 'smart city' led the designers to the idea of connecting everything and incorporating it in gameplay.[8] A team of over 130 employees worked on the game one year; currently, over 600 employees and a total of 6 home studios are working on Watch Dogs. Ubisoft Reflections, the team behind the Driver series, provided a suite of vehicles with "state-of-the-art physics and handling" to explore the intricate roadways of the large Chicago sandbox.

After the trailer of the game was leaked a day before its conference at the 2013 E3, Ubisoft's head of sales and marketing Tony Key said that "If half the people have already seen it, then it's half as effective." and "when things don't hit when they are supposed to it causes a lot of inefficiency and generally lowers the impact."[10] Keys also added that the game's introduction a year ago was one of those very special occasions that's difficult to replicate.[10] Following E3 2013, the game was featured in a segment on Late Night With Jimmy Fallon.

With the continued partnership between Ubisoft and Sony, Ubisoft announced that the Watch Dogs will have additional four missions for the current and next-gen Sony consoles, the completion of which will unlock a new outfit customization for Aiden Pearce.[11]

Watch Dogs was announced at E3 2012 press conference and was met with rousing, positive reception, and was praised for its "next gen"-quality graphics and received numerous Best of E3 2012 awards.[13] At the following year's E3 convention, with a new trailer, a live PS4 demo, and the reveal of brand new multiplayer and companion gaming modes, Watch Dogs was again lauded by fans and critics alike, and was chosen by a number of press outlets as one of E3’s most impressive games across both current and next-generation platforms.

During it's first few days of release, Watch Dogs drew controversy due to it's handling of females, people of homosexual orientation, and of color. Speaking about it's handling of females, Arthur Gies from Ploygon said in his review that "[f]emale characters in Watch Dogs are victims, to be kidnapped or murdered in the interest of plot or character motivation and are almost all overtly sexualized,"[20] while Kirk Hamilton in his review for Kotaku UK said of minorities: "[t]his game feels aimed squarely at the predominantly male video game demographic ... only one black character gets anything resembling character development; the rest exist simply to kill or be killed, or occasionally to engage in sexual assault while on camera." Paste Magazine's Gita Jackson also expressed harsh criticism of the game's portrayal of minority characters and NPCs, saying "while it shows us minorities when discussing crime and gunplay, this suggests that poverty and violence are the only contexts in which minorities exist in the Chicago of Watch Dogs ... I would not go so far as to call this racist, or even to think it was done with malintent, but it does strike me as dishonest."[21]

A video on Youtube titled "Making the World a Better Place" showed a Watch Dogs player using the sandbox-freedom to gun down black people, Muslims, homosexuals, Human rights activist, Scientologists and everything else that they deems to be worthy of "making the world a better place."[22] The day of the game's release, Ethan James Petty, a scriptwriter on Watch Dogs, tweeted that he "can’t wait to see how you guys abuse our poor npcs in #WatchDogs Be sure to take screenshots!"Cite error: Invalid <ref> tag; invalid names, e.g. too many[23] When confronted by game developer David Gallant about the fact that players were using the Profiler to commit perceived acts of hate, Petty commented, "[That's the] sick reality we live in – people’s privacy reduced to facts," he explained. "Profiler at its core *should* be offensive to everyone."Cite error: Invalid <ref> tag; invalid names, e.g. too many